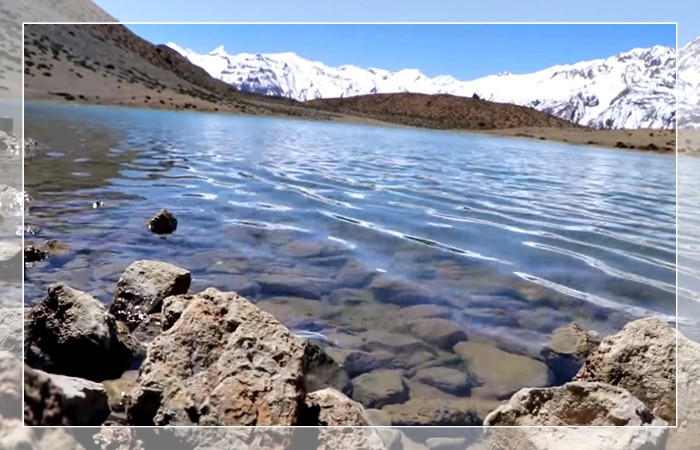 Dhankar Lake situated at an elevation of 4270 m above sea level (14005 ft), is located in Lahoul & Spiti District of Himachal.  The lake is at a distance of about  2 km from the world-famous ancient Dhankar Monastery. The lake, situated in the middle of a mountain and surrounded by other lofty mountains is blue-green in color. The Dhankhar lake is spread over a large area with crystal clear water.  The water of the lake seems calm, undisturbed, serene and crystal clear.  Surrounded by pink-brown hills, the lake offers a perfect idyllic camping site.  The locals take a round of this lake as this is considered a sacred ritual.

The small Dhankar village is located at an altitude of over 3,800 meters.  It is linked to the rest of the valley via a motorable road.   It is 32 km away from Kaza. Dhankar village is one of the highest points where world-renowned architectural pieces are located. There is also a straight climb from the Dhankhar village to Dhankhar Lake.

Like many monasteries in Ladakh, Spiti and even in Tibet, the Dhankar monastery was built as a fort monastery in the Tibetan style.  The entire complex was built on a 1000 ft high mountain spur overlooking the confluence of the Spiti and Pin Rivers. Its setting and location are simply spectacular.   In the local dialect, Dang means rock and Khar means cliff.  Thus the name Dhangkar for this fort monastery.  From the fort, one can see the vast expanse of the Spiti Valley.   In ancient times, the fort was also used as a prison.  It contains a series of 15th-century wall paintings. Today the monastery, especially its base is in a dilapidated condition and is on the stage of worsening because of soil erosions caused by rains and wind.

The World Monuments Fund has declared this Monastery among the 100 most endangered sites in the world. Due to the deteriorating state of the old monastery, a new Monastery was built in the village.  A newly built broad road connects the old Monastery with a new Monastery. This road had been made for the use of the Dalai Lama during his visit to Dhankar.

Dhankar was the ancient capital of the Spiti Valley Kingdom in the 17th century.  In fact, its history predates to a much earlier era.  It was the palace of the former rulers of Spiti, who were called Nonos.  The Nonos who ruled the people of the land were noted for their harsh penalties until the British replaced them.

To reach the lake one has to trek for about 45 mins from Dhankar Gompa.  For the first hour, it is an easy climb.   Thereafter one has to be careful while walking on loose pebbles, rocks.    After getting some distance, you can halt and enjoy the panorama especially of the Dhankhar monastery and village from this vantage point.  Soon you reach the lake site.

Places to Visit in Dhankhar

Places to visit in Dhankhar and around the nearby tourist places of interest mostly include monasteries, as follows :

Kungri Monastery is the second oldest monastery in Spiti valley. It was constructed in the first half of the 14th century. There are a large number of silk paintings, large statues and over 300 volumes of holy Tibetan text in Kungri Monastery.

It is located 12 km away from the town of Kaza, over the Kye village. Beautiful scriptures and paintings of Buddha and other goddesses are housed here. Lhakang Gompa – Its major interest lies in the small chapel on the uppermost peak behind the village Dhankar. The Lhakang Gompa, with its wonderful murals, depicts the life of the Buddha. There are numerous old and new ‘thankhas’ perched from the ceiling. From the windows of this temple, a bird’s-eye view of the valley and mountain ranges is visible.

Lahoul and Spiti are two different regions but one district with Keylong as the district HQ of Lahoul and Kaza as the district HQ of Spiti in Himachal Pradesh. Kaza can be reached from Manali side as well as from Shimla side.   The small town of Kaza is located on steep ridges on the left bank of the Spiti River.  Long back it was the headquarters of Nono, the chief of Spiti.

The best time to visit Dhankar Lake and the beautiful village is from May onwards till October. During winters it is extremely cold here and therefore not advisable although some unconventional travelers come here during winters as well.

How To Reach Dhankar

There is neither any direct flight to Dhankar village nor any train service. Nearest airport in Himachal is the Bhuntar airport in Kullu.

Dhankar can only reached by road. From Shimla one has to first reach Tabo which is 360 km and takes 10 hours approx. Tabo to Kaza is 48 kms and takes about 1 hour. The distance from Tabo to Dhankar Monastery is about 32 km and between Dhankar and Kaza is another 34 km. 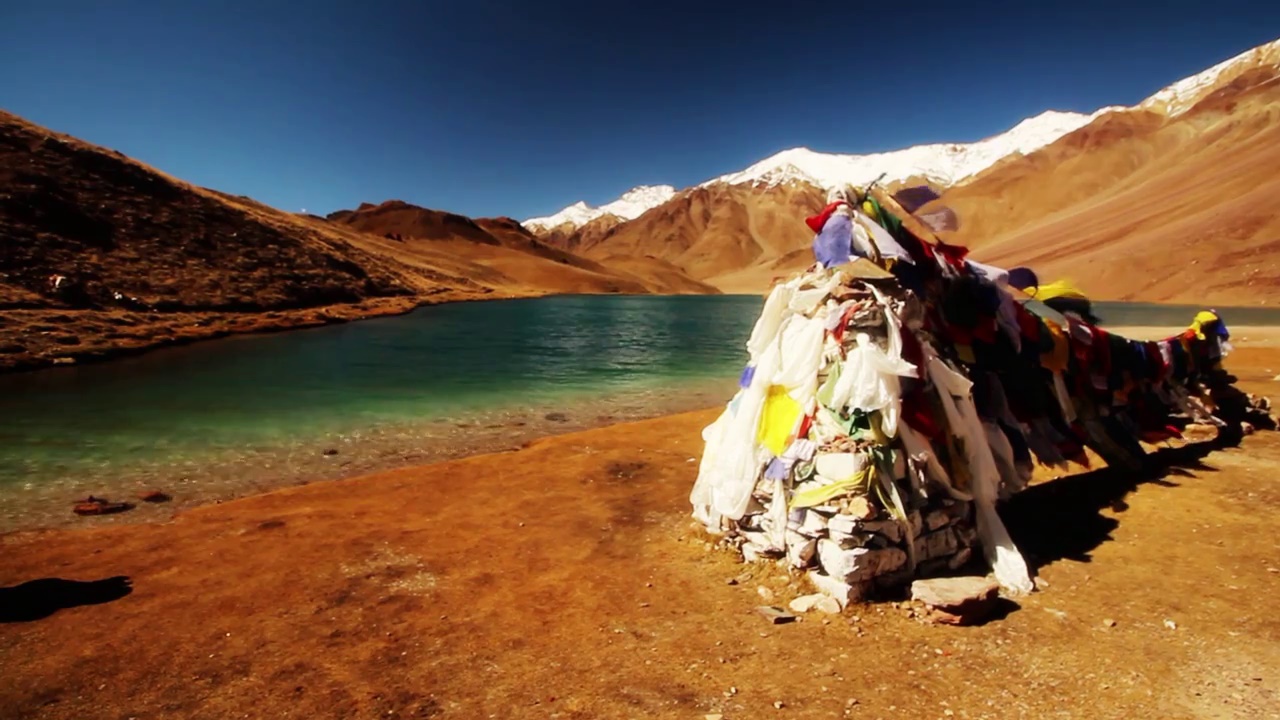 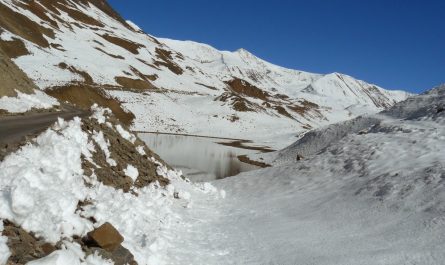 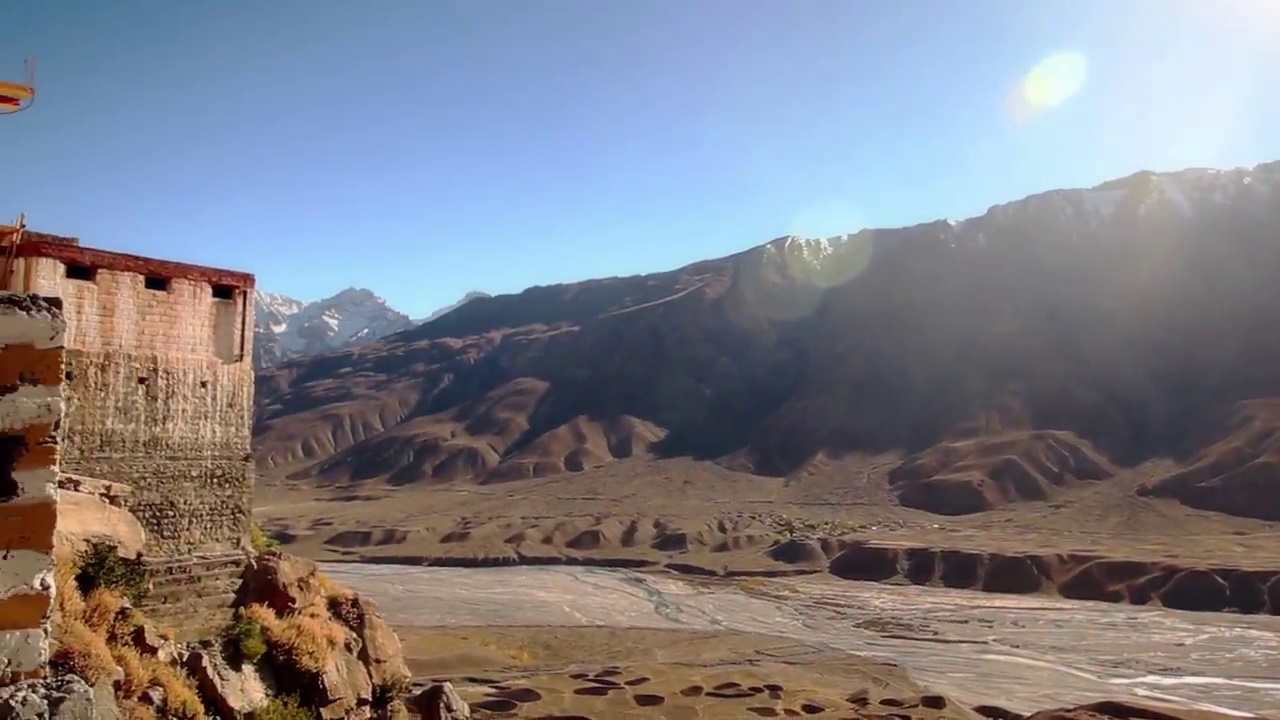