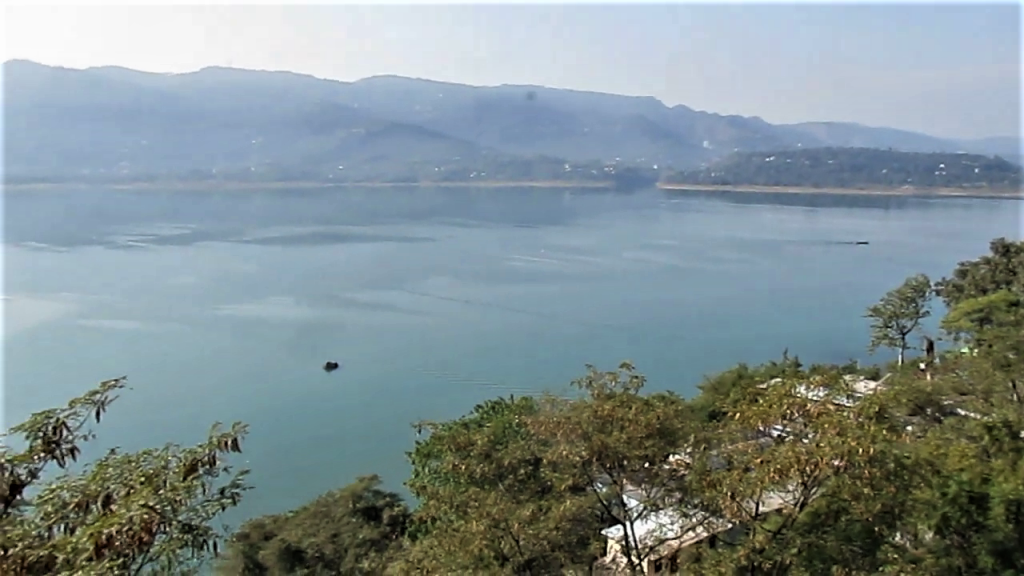 Bilaspur, with an area of 1,167 sq km, is one of the nine districts of the beautiful state of Himachal Pradesh in India.  It is situated in the Shivalik range of mountains in the lower Himalayas. It is surrounded by hills on all sides. In one side its border touch the state of Punjab.  The district is famous for the manmade Govind Sagar Lake which acts as the reservoir for the Bhakra  Nangal Dam project.  There is a bridge here called Kandraur which is considered to be the second-highest of its kind in Asia.  Bilaspur is a district as well as a town.

The history of Bilaspur can be traced to the 7th century when it was the capital of a princely state known as Kahlur and the ruling dynasty was Chandela Rajputs.  The town of Bilaspur was however founded in 1663. It became part of  British India as a princely state.   In 1665, the Sikh Guru Tegh Bahadur came to Bilaspur to attend the mourning of the ruler, Raja Dip Chand.  During this time the dowager Queen Rani Champa gifted the Guru a piece of land.  It is on this land that the holy Sikh pilgrimage of Anandpur Sahib was built.  Anandpur Sahib is presently in the neighbouring state of Punjab.

When India gained its independence in 1947, the then ruler Raja Sir Anand Chand acceded his state to the Government of India.  Bilaspur became a district of Himachal Pradesh in 1954.  When the Govind Sagar Dam was built on the river Sutlej, the old historic town of Bilaspur got submerged into it in 1963.  In its place came up the new town of Bilaspur.  Bilaspur district has four tehsils named  Ghumarwin, Bilaspur Sadar, and Jhandutta.

How To Reach Bilaspur, Himachal Pradesh.

Bilaspur in HP is very well connected with other cities of India through regular buses of HRTC, Punjab Roadways, Haryana Roadways and many private buses run by private operators as well.  The NH 21 from Chandigarh to Manali passes through Bilaspur, Sundernagar, Mandi, Kullu till Manali.  Another National Highway that passes through Bilaspur is NH 205 passing through Ropar, Kiratpur Sahib in Punjab, thence to Bilaspur and finally terminating in Shimla. Bilaspur Bus Terminal is located in the heart of the town.

The nearest railhead is Kiratpur Sahib Junction in Punjab located approx. 98 km from Bilaspur.  It is better one uses travels by road to reach this town as road conditions are absolutely fantastic.  But yes people coming from far away locations in India can come upto Kiratpur Sahib, a holy Sikh Pilgrimage site and then onwards to Bilaspur by road.

Bilaspur does not have any airport.  However, the nearest airport can be said to be located at a place called Jubbarhatti near Shimla at a distance of 85 km from Bilaspur via NH 205.   Earlier Kingfisher Airlines used to fly to Shimla but ceased its operations in the year 2012.  Then wef Apr 2017, Alliance Air started its commercial operations.  Another airport is located in Kullu which is at a distance of approx. 130 km from Bilaspur. As in all airports, frequent cab services are available from the airports to reach your hotel or destination in Himachal.

Bilaspur has overall pleasant moderate weather throughout the year but summers can get a bit hot.  Temperatures during summers range between 20 to 40 degrees Celsius.   Similarly in winders, the banks along the river Sutlej is covered in a thick blanket of fog, resulting in the chill that requires taking out your woollens.  November onwards the temperatures would be cold to freezing.  The rainy season in the area like the rest of the country lasts from early July to mid-September.

What is the best time to visit Bilaspur?

The best time to visit Bilaspur as also anywhere in Himachal Pradesh is during the summer months, which is May onwards till October.   However, winter also has its charm, especially if you want to see snowfall in the upper reaches of Himachal Pradesh.

Hindi is spoken by the majority of the population as their first language, followed by Punjabi and English.  The Bilaspur or Kahluri, a local dialect, which belongs to the Western Pahari family is the main language spoken.

Bilaspur is famous for the Gobind Sagar Lake which is formed by the Bhakra Dam on the river Satluj.  Gobind Sagar Lake is Used for various water sports activities like kayaking, motorboating and sailing among other things.  There are a number of forts which one can visit although most of them are in ruins.  Bahadurgarh Fort was the fort of kings of Bilaspur.  The bridge at Kandraur on the Satluj river was once considered the highest bridge in Asia.  Bandla hill is also used for paragliding.   There are some famous temples in Bilaspur Himachal Pradesh like Laxmi Narayan Mandir, Baba Nahar Singhji Temple, Badoli Devi Temple and Naina Devi Temple.

There are a number of forts in Bilaspur which are as follows:-

There is a palace-cum-fort called Kot Kahlua built by Raja Bir Chand.    It lies at a not very far from the Gangwal Hydro Electric Station in the Naina Devi Hills.  The fort is built of stones, each side of the wall is about thirty meters length and height. The walls of the fort are about two meters in thickness having two storeys of fifteen metres height each.   Inside the fort premises on the upper storey, is a small temple with an idol of stone dedicated to Naina Devi.

The fort of Bahadurpur is situated on a hill called Bahadurpur hill, which is the highest point in the entire district, 2000 MSL.  The Bahadurpur hills derive its name from the Bahadurpur fort.   Due to its height, the place occasionally receives snowfall during winters. n winter.  It is said that the fort was built by Raja Keshab Chand in 1620AD.  From this vantage point, one can see other places of interest like the Ratanpur Fort, Fatehpur Fort, the town of Swarghat, the plains of Ropar in Punjab, Naina Devi hills and also the mountains of Shimla.

At a distance of 58 km from Bilaspur is located another ruin of a fort called Sarium Fort.   From the ruins, one can presume that the fort was about twelve meters high with one metre thick walls.   It is believed that the fort was originally built by the ruler Raja of the erstwhile Suket State.  Subsequently, the fort was won in a battle by the ruler of Bilaspur.

The fort of Tiun is located 45 km from Bilaspur.  This fort is also in ruins.  It is said that  Raja Kahn Chand got it constructed in 11th century in an area of around 1,40,000 sqm.   The fort is rectangular in shape having length and breadth of 400 and 200 meters respectively.   The height of the wall of the fort varies from 2 meters to 10 meters with the height of the main gate being 3 meters height and 5 ½ meters in breadth.    The fort is said to have once served as a prison.

It is said that the fort was constructed by the ruler of Bilaspur Raja Ratan Chand, who ruled for over 50 years from 1355 to 1406From here one can see the beautiful and magnificent view of the Gobind Sagar lake with the beauty of the surrounding hills thrown in.   From the remains of the ruins of the wall, it can be assumed that the wall would have been 20 meters in height with one meter in thickness.   Inside the fort, there is a small but a very temple, which houses two busts of the goddess Ashta Bhuja (eight-armed) and some other deities.

Sunhani Fort is situated approx. 22 kms from Bilaspur also just 8 km from Ghumarwin.   It is said that Raja Vikram Chand, who ruled from 1555AD to  1593 AD made Sunhani his capital .   Sunhani was the capital of Kehloor kingdom for more than 100 years.  The Chandel kings had a tradition.  They constructed temples wherever they went and settled.  Here also they the temple of  Lord Nahar Singh Ji (Nar Singh Devta) and the deity is worshipped to this day.  Even today, the local people offer their new harvest called Nasrawan to the deity.

The historical town of old Bilaspur, which was founded in 1663 and was the capital of the princely state for centuries, got submerged with the completion of Bhakra Dam in 1963.  In its place came the new town of Bilaspur on higher ground near the old capital.  The new township of Bilaspur has been conceived, planned and built on modern lines.

The kandrour bridge is located 8 km from Bilaspur on National Highway 88 on river Satluj.    The construction of the bridge in April 1959 and was completed in 1965. The total span of the bridge is about 280 meters with a breadth of about seven meters and the height above the lowest river bed is about 80 meters.  This engineering marvel was once considered the tallest bridge in Asia.

You may have missed